Their color is red or yellow and the damage they make can be very big.

They can reach a state of immense quantities.

They are moving between plants, using webs that they produce,

and suck the liquids, out of the leaves, leaving them dry.

This can happen in a matter of days if not taken care of.

Spider mites are active on all vegetable crops, and they develop tolerance to many designated pesticides.

They are not affected at all by many of the pesticides developed at great cost to give a proper solution against them, turning to be very hard to be eradicated.

Use at least 4 kinds of different pesticides, and alternate between them every 3 days, in order to overcome pest’s resistance, and completely exterminate them. For further information about this, read this post, and this post also.

There are 3 ways to eliminate spider mites: chemical, organic and biological.

The best pesticides for spider mites,

Pyrethrin (pyrethrum)-   A collection of six esters, which are found in high concentrations within the achenes of the flower. It targets insects nervous systems. Pyrethrin induce excited behavior in the insect, which results in increased insect exposure to the pyrethrin and eventual death.

Paraffinic oil- Acts as a smothering and prevents insect respiration. 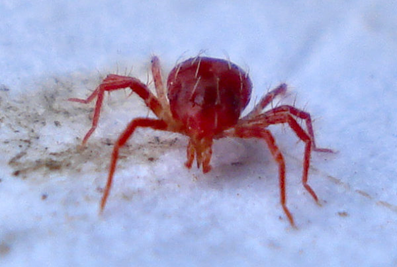 The carnivorous mite Phytoseiulus persimilis, which originates in South America, serves as an effective natural enemy of spider mites.
The adult female is pear-shaped and orange-reddish in color.
Its main characteristics are: long front legs and rapid movement, especially when exposed to strong light or when its normal activity is disturbed. The young stages (larvae and nymphs) are oval in shape and pale pink in color. Its rate of development is almost twice as fast as that of the pest.
It is no wonder, then, that the Parsimilis mite is considered a particularly effective natural enemy, with an impressive ability to suppress populations of the harmful mite.

A great mite predator for spider mites in humid greenhouses, and in dense field crops. It consumes eggs, nymphs, and adult stages of mites. Spider mites are killed by being searched by the predatory mites, that suck them dry once found.
Release at first sign of mite infestation. Once leaf damage is serious, as more than 4 mites per leaf, achieving control is more difficult.

Apply mites repeatedly by inverting the bottle, over spider mite-infested leaves. Each inversion delivers a measured amount of vermiculite. Tap and roll bottle before re-opening it.
These are live organisms, that are shipped directly from the manufacturer, via fast next day mail delivery, so they do not die during transit. Biological beneficials have a very short life expectancy and therefore need to be introduced into the crop, as soon as possible after receipt.